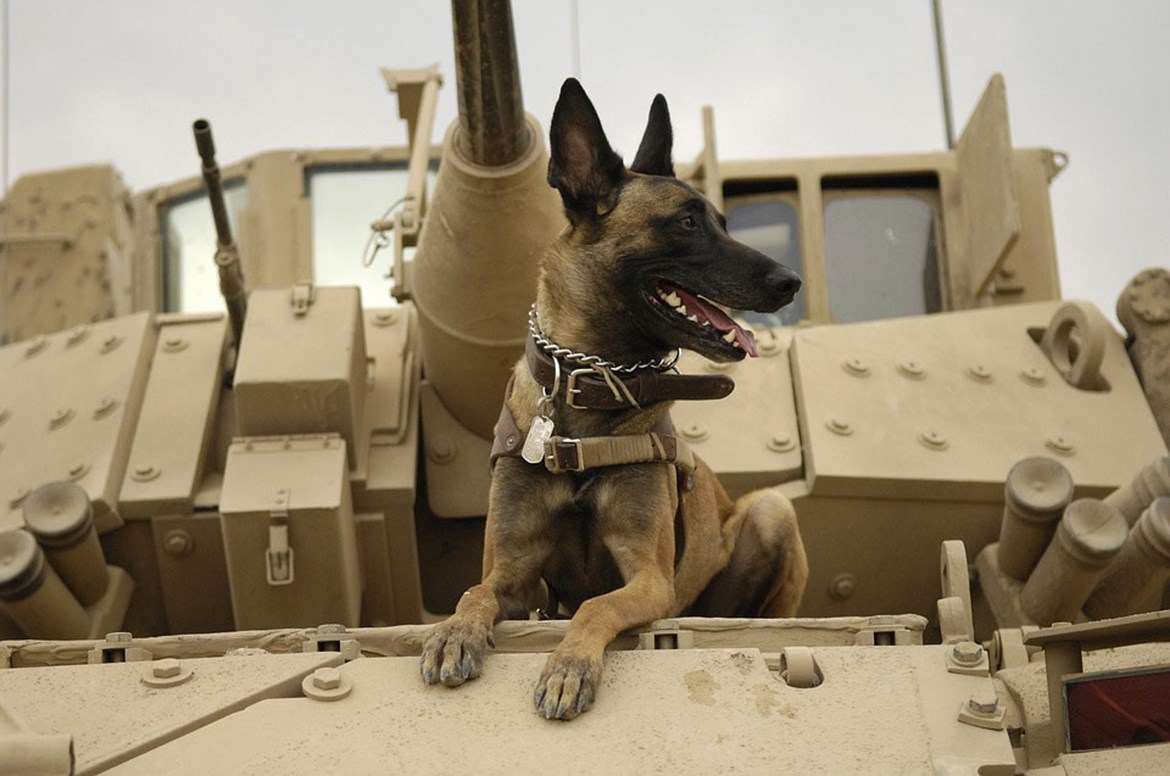 Yes, you read that right, dogs attached to SAS and SBS units have been awarded Victoria Crosses, or rather the animal equivalent to the Victoria Cross - Britain’s highest military honour for combat.

The PDSA Dickens Medal was introduced in 1943 during World War 2. It celebrates “the relentless, the resolute, the fearless and the diligent actions performed by animals in times of great adversity.”

The mission to end the siege became one of the most decorated campaigns in the Afghan campaign. The militants seized and fortified the building, using it to keep a consistent barrage of rocket-propelled grenades and gunfire on the Allied forces below.

As the SBS unit got into the building, militants dropped grenades through holes in the floor in order to kill the elite unit. Mali and his handler were both injured by the constant grenade shrapnel heading their way. The SBS mission lasted 8 and a half hours. During the mission, Mali saved the lives of his unit many times by alerting them to locations of enemy soldiers, he also found the safest routes through the booby-trapped building ensuring no men were injured by mines or IEDs.

When the SBS unit and their Afghan army support unit had lifted the siege and killed the militants, they noticed Mali had been injured in his belly, ears and chest. He had to be carried away from the building. The SBS unit saw him as their guardian angel and his handler said “You can have a really good play with him, a really good cuddle, but at the same time, when you want to work, he’s on point, working.”

Mali, now aged 10, is one of only 71 other animals to be granted the PDSA Dickin Medal - the highest military honour dogs can receive. His medal was awarded for “For tireless bravery and devotion to duty during an operation in Afghanistan with the British Military in 2012.”

An elite Australian SAS unit flew into the Khas Uruzgan district of Afghanistan to carry out a mission that was part of Operation Slipper. Shortly after being dropped off by helicopter with his Australian SAS unit, Kuga a Belgian Malinois, picked up signs of enemy activity. It was an ambush, the enemy units were concealed in foliage across a river. They were completely concealed from the SAS unit. Kuga, knowing the danger the enemy posed to his unit lept into action so he could protect his friends.

He followed the trail he found and started to swim across a river, the SAS patrol was far behind him as the dog darted forward. As the unit caught up to him and reached the river bank they witnessed gunfire kicking up the water around Kuga. The SAS unit ran to the bank and gave the dog covering fire.

Kuga was hit as he neared the opposite shore and then ran at the insurgents - forcing them out of cover and viciously attacked the insurgents. He tore into the arm of one enemy and was getting him under control when the soldier fired a round at point blank range from his AK-47 at the dog. Kuga was badly injured and eventually made his way to the SAS unit waiting for him on the other bank. He was hit 5 times altogether and had shrapnel wounds on his back. Kuga had given the SAS unit life-saving help and given them the location of hidden enemy troops.

His SAS handler provided emergency treatment when Kuga reached the shore, whilst the rest of the unit provided covering fire. He then picked up the dog and carried him back to rendezvous with another patrol in the area. They took Kuga back to the base where he received more treatment.

The PDSA celebrated Kufa: “If it wasn’t for Kuga detecting the concealed enemy position, his patrol would have walked into an ambush with inevitable loss of life. He showed great skill and courage when it mattered most, despite suffering serious injury.”

Kuga decided to take action to defend his SAS unit, they never gave him an order to attack, for his bravery and support he was awarded the Dickin medal “For unstinting bravery and life-saving devotion to his handler and his unit, while on patrol with Operation Slipper in Afghanistan, 2011.” His SAS handler credits Kuga with saving his life and enabling him to return home to be with his family. Kuga sadly passed away a year after his incredible bravery.

Shortly after arriving in a small village in Northern Syria, An SAS patrol was trapped in a 360-degree ambush. The SAS unit were in trouble as the enemy started closing in, their only hope was to find an escape route. It was at this point that the SAS dog leapt into action and attacked one of the firing enemy soldiers and ripped his throat out. The SAS soldiers watched as the dog sprinted into one of the buildings from where they were taking fire. The SAS unit could hear screaming and shouting before the firing from the house stopped.

The SAS were then able to enter the building, take cover and work out a plan. When the men entered the building the dog was standing over a dead gunman. They were then able to make a tactical retreat and sustained no losses. The SAS patrol commander credited the dog with directly saving the lives of each of the 6 SAS soldiers.

The unnamed dog has not yet received the Dickens Medal due to still being in active service.

Animals who have assisted allied forces in war have been immortalised by The Animals in War Memorial close to Hyde Park’s Brook Gate. It was unveiled in 2004 on the 90th anniversary of World War 1. The inscription reads: "This monument is dedicated to all the animals that served and died alongside British and Allied forces in wars and campaigns throughout time. They had no choice."