In June 1944, preparations were underway to launch D-Day. General Eisenhower wanted the invasion of Normandy to take place on the 5th of June, but RAF Group Captain James Stagg warned against the date due to the fact that a cold weather front approaching from the west would cause rough seas, heavy winds, and push away vital cloud cover that would protect ships and landing craft from German bombers.

Group Captain Stagg knew it was important to time the date and time of the invasion to coincide with a break in the weather.

He was posted to 518 Squadron on the island of Tiree, a tiny island which is the furthest West of the Inner Hebrides.

518 Squadron were storm chasers, they were tasked with flying into weather fronts to gather data that would be used to compile vital weather maps. These maps were vital for RAF Bomber Command during the war, in the 1940s there was no other effective way to map approaching weather systems. Knowing what the weather was going to be like was crucial for planning successful bombing raids.

The data needed to draw up these weather maps was temperature, air pressure and wind speed. This data would be recorded by the brave 518 Squadron flight crews and sent to HQ in coded morse messages. Peter Rackliff’s position was in the Perspex nose of the Halifax bomber, measuring surface winds, he was often in the eye of the storm.

Their job was far from easy, 518 Squadron was known as one of the most dangerous postings in the RAF. They often had to fly halfway to Canada over the Atlantic Ocean into freezing cold air. Peter recalled that they would often be flying a mere 60 feet above the ocean.

Ice would form all over the rickety Halifax bombers, the flight crew would frequently hear bangs as chunks of ice fell off and hit part of the plane. Raindrops would freeze and shatter against the plane’s perspex, Peter also recalled his plane being hit by lightning regularly.

Not only were the weather conditions far from ideal, but the planes also had to be modified to cope with the distance they were expected to cover and the conditions they had to fly through. The Halifax V bombers were stripped to shed weight and the Merlin engines were boosted in order to maximise range.

Unfortunately, the boosted engines suffered much more wear than they were designed to endure which made the planes unreliable. According to Peter Rackliff, the pilots would often be wrestling with the controls to simply keep the plane stable.

In just 18 months, 518 Squadron had 12 aircraft go missing on these missions. They never found the wreckages.

In June of 1944, 518 Squadron was given their most important mission of the Second World War. They were to track any weather systems that would hit the coast of France around the 5th of June of that year. 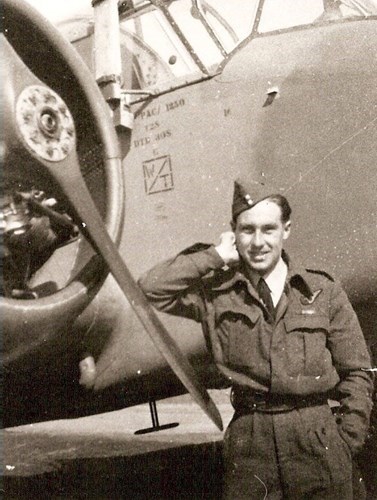 Peter Rackliff standing next to his Halifax V bomber

Due to high pressure over France and low pressure over England, rough seas and high winds filled the English Channel in the days leading up to D-Day.

Every day leading up to D-Day, 518 squadron flew 1000 miles from Tiree towards the Icelandic Gap to collect all the information that was missing about approaching weather fronts. Peter Rackliff and his crew alone flew 6 times between the 3rd and 4th of June into this weather front, courting death each time.

Due to their bravery and the data they captured on these dangerous missions, Peter and 518 squadron were able to identify a period of calm weather conditions on the 6th of June. Calmer seas and settled conditions meant that there was just enough of a break in the generally poor weather for the Allies to land on the beaches of Normandy.

D-Day could well have been a failure had it not been for the brave work of Peter Rackliff and the other brave veterans who flew in 518 Squadron over the early days of June 1944. The landing craft used by the allies were rudimentary and were not able to cope with sailing in heavy seas.

The next forecasted window after the 6th of June was on the 19th of June, 2 weeks later. The weather on these days was far worse than the weather experienced on the 6th of June. D-Day would not have been able to go ahead on the 19th. The next available window was in September, the chances of keeping D-Day a secret for that long would have been very slim.

After the war, Peter spent most of his professional life in the Met Office where his advanced experience and knowledge earned him much respect and responsibility overseeing projects of global importance.

Veteran Peter Rackliff died on the 13th of May 2019. The well-loved family man passed away at the Queen Alexandra Hospital in Portsmouth due to complications from an infection. Gone, but not forgotten.

D-Day marks one of the proudest moments in British history, the Germans were dealt a heavy blow by British and allied troops that became a major milestone of World War II. British heroes have put their lives on the line for our country in every generation since, often, after they finish serving their country they need a little help getting back onto their feet.

For just £10 a month, you can help us proudly support our veterans. Your £10 a month also gives you the opportunity to win up to £35,000 every month in our Veterans’ Lottery. What have you got to lose?