One brave soldier and his four-legged friend who lost their lives in Afghanistan have been remembered forever on the Armed Forces Memorial Wall.

They say the bond between a man and his dog is one of the strongest of all and in the case of Lance Corporal Liam Tasker and his faithful sidekick, Theo, that certainly rings true.

The pair were on patrol in Helmand province on the morning of 1st March 2011, when 26-year-old Liam was tragically shot and killed in action. No more than a few hours later, Theo suffered a seizure and died on his return to Camp Bastion.

Many of Liam’s friends and family believe that the springer spaniel died of a broken heart.

“Him and Theo, they just had this bond. He was just with Theo 24/7, he was his best friend,” explained Liam’s mother, Jane Duffy.

“At least they’re together and I take a lot of comfort from that,” she added.

Lance Corporal Tasker was born on 11 December 1984 in Kirkcaldy, Fife, Scotland. He joined the Army in 2001 and was originally a vehicle mechanic in the Royal Electrical and Mechanical Engineers, but his passion always lay with dogs.

A transfer to the Royal Army Veterinary Corps in 2007 followed after Liam retrained as an Arms and Explosives Search dog handler – with a natural empathy with dogs, Liam was a rising star in the ranks.

“The lads all knew him as BLT, Big Liam Tasker, and I don’t mean in size as well. He was a character,” explained Jane.

“Anyone who met Liam will tell you that they’ll never forget Liam.”

Liam and Theo were deployed to Afghanistan on 8th September 2010 as part of the 1st Military Working Dog Regiment and was attached to the 1st Battalion Irish Guards in February 2011.

The duo had significant success across Helmand province, detecting improvised explosive devices (IEDs) which saved lives not only amongst British Army units, but also in the Afghan Farming community who were suffering more casualties than combatants in the area.

Theo had set a new record for bomb finds during their time on deployment and was even awarded the Dickin Medal, also known as the animals' Victoria Cross, in 2012. 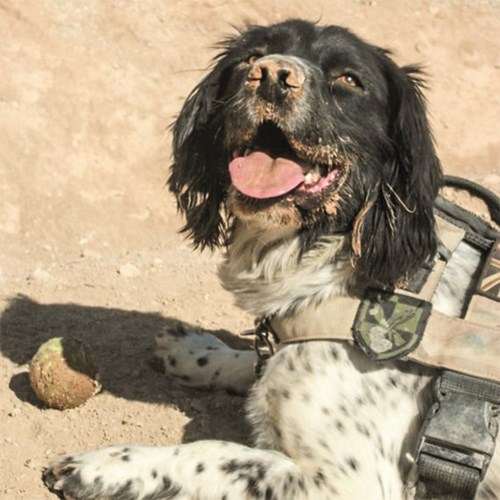 However, on 1st March 2011, Lance Corporal Tasker and Theo were, as usual, at the head of a patrol when they were engaged by small arms fire.

Liam was struck and died from the injuries he sustained.

Theo was returned to Camp Bastion, but on his arrival, he suffered a seizure and died.

“It’s ten years for me, but it still feels like yesterday and I’ve had people say to me that you must be able to move on, but you can’t move on,” said Jane.

Liam was repatriated with the ashes of his beloved Theo and they were buried together in Tayport, the brave soldier and the dog lovingly described as the “little git who jumped in his sleeping bag at night.”

But thanks to the Armed Forces Memorial Wall from the Veterans’ Foundation, Liam and Theo will never be forgotten – the tribute to them serving as a permanent online memorial where friends, family and members of the public can leave messages of respect.

“As a mum, your biggest fear is that your sons or daughters are going to be forgotten,” said Jane.

“They died serving the country, they should always be remembered. There’s so many people forgotten about, but they’re all heroes.”

To pay your respects to Liam and Theo and light a candle to their memory, find their memorial here.

Or to create your own memorial to a loved one, visit the Armed Forces Memorial Wall.