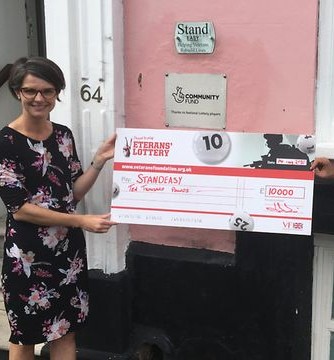 How does Stand Easy help Veterans?

Veterans' Foundation is proud to help fund the great work carried out by Stand Easy. The charity exists to help Veterans who are suffering from PTSD to rebuild their lives with acupuncture treatment.

Naji Malak, CEO of Stand Easyexplains his work:"I am the acupuncturist who directly treats Veterans suffering from PTSD. I would like us to be the first port of call for any Veteran who is suffering from PTSD because acupuncture is quick and effective. If they get other support after visiting us, at least we have removed the trauma. As a result, they are much more receptive when taking on advice and counselling from other people. When you are traumatised you are exhausted. Almost every Veteran who came through our doors was completely flat. They had no energy and had just been running on empty for far too long. Talking about things you don't want to talk about requires a lot of energy. If you don't have that energy to work through these problems, you're going to get more exhausted and more disturbed - it's a futile exercise.”

Naji continues: “Stand Easy are saying you don't even have to talk about it, we can take the trauma away and then if you chose to talk about it, you have the freedom to talk you can be who you are and get better. When Veterans leave the Armed Forces they miss the friendship, the unconditional love and support of their comrades. We try to make them feel like they are on the level, there is nothing wrong with them, they are just people who needed some help as we all do.”

How have Veterans been helped by Stand Easy?

Darren served in the military for 24 years, ended up as Sergeant and served in Afghanistan, Kosovo, Bosnia, Iraq and Northern Ireland. “I was prone to violence, had violent outbursts even at work and had to drink heavily to sleep. After a failed attempt to take my own life, my doctor put me on tablets, but they didn't work for me. I decided I needed to try to get help. I've been with counsellors and the issue is when they're 21 and have their degree...They haven't been anywhere and they know nothing about wider life. When they try and ask you about your deepest darkest secrets you're not going to give them that trust. With Naji at Stand Easy, there is no typical counselling. You don't have to say anything if you don't want to. He just feels your pulse and gets to work. When he's finished you feel “amazing.

Darren continues:“I am now completely sober and my family see a completely different me and we're a family again. My bosses at work saw a massive change in me after the first treatment. I went from dreading going in to work to actually enjoying it. Talking helps some people but it never helped me. Stand Easy helped me and I've never felt more elated in my life. The first day I came in, I was a nervous wreck. Ten minutes after the first needle went in you would of thought I was asleep I was so relaxed. You have to try it to understand just how quick it is. “

Another Veteran explains: “I did 7 years in the military. I got blown up and shot at in Afghanistan and came out with Post Traumatic Stress Disorder (PTSD). When I left the Army, I was very regimented with how I saw the world. Everything was very black and white. I was angry, frustrated and had suicidal thoughts over 5 times every day. I was passed around a lot of charities but nothing had a real impact on me until I let Naji do the acupuncture he had to do. I walked out through the doors as if I had taken a 20kg backpack off my back, I felt like a free spirit in a way. Naji is so friendly that I'm coming here not just for the treatment but for the caring support he offers. My whole family sees how much calmer I am now.”

Veteran Dan explains his journey: “I served in the British Armed Forces for 8 and a half years including 3 tours of Afghanistan. In his last tour of Afghanistan, he was injured and eventually medically discharged. My PTSD got worse and worse and I knew I needed help before the birth of my second son. My problem manifested itself when I was trying to sleep, I would suffer hallucinations as I was trying to fall asleep, they would often keep me up all night. I saw an advert for Stand Easy and decided to go for it...I'm so glad I did! Even if I lived somewhere far away I'd still come every week to get treated.

Dan continued: “When you need help, the last thing you want is to be put on a 7-week waiting list. With Stand Easy, there is no messing around, I called up and I was booked in less than a week later. I've had weekly sessions since then. After 1 session the hallucinations never happened again, my sleep had improved 100%. My anxiety and general wellbeing improved every single week after that which means I don't have to worry. Being able to sleep soundly every night has had a massive impact on my life.”

How you can help

Veterans’ Foundation provides generous grants to charities that support UK Veterans. To date, Veterans’ Foundation has provided over £4 million to over 270 military charities. To continue offering this support, we need your help. Please join the Veterans’ Lottery today, or donate to enable the support of Veterans in need.